This module introduces undergraduate students to the ways that textual criticism can shed new light on King Lear.  The three activities and two assignments should allow students to explore textual variants in different editions of the play, to understand how editorial choices shape the play, and to create their own version of Lear by becoming editors themselves.  After mastering these skills, students can use the service learning exercise in this module to familiarize middle or high schoolers with basic aspects of these early printed texts.

The goal of this module is to show students that there is no one, single version of Lear, but rather two different early editions: the 1608 Quarto and the 1623 First Folio (the latter represented in this module by the 1685 Fourth Folio).  Comparing these early printings allows students to grasp the instability of print while also offering new possibilities for understanding characterization, plot, and theme in Lear.  By becoming editors themselves, students will learn firsthand that every edition of Lear is really an interpretation of the play.

It will be very useful for students to have some basic terminology about early modern print:

Students may also find it helpful to know about the critical debates about the origin of the differences between the Quarto and Folio:

As a supplement to this module, we have digitized the Quarto and Fourth Folio (see Digital Texts).  Students can use the Mirador reader for side-by-side comparison of these editions.

Assignments (out of class) 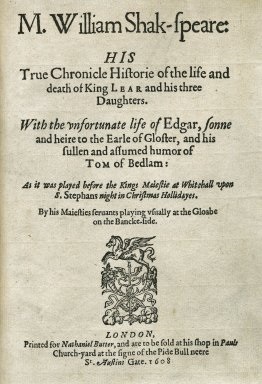 Going beyond Lear: Text and Romeo and Juliet