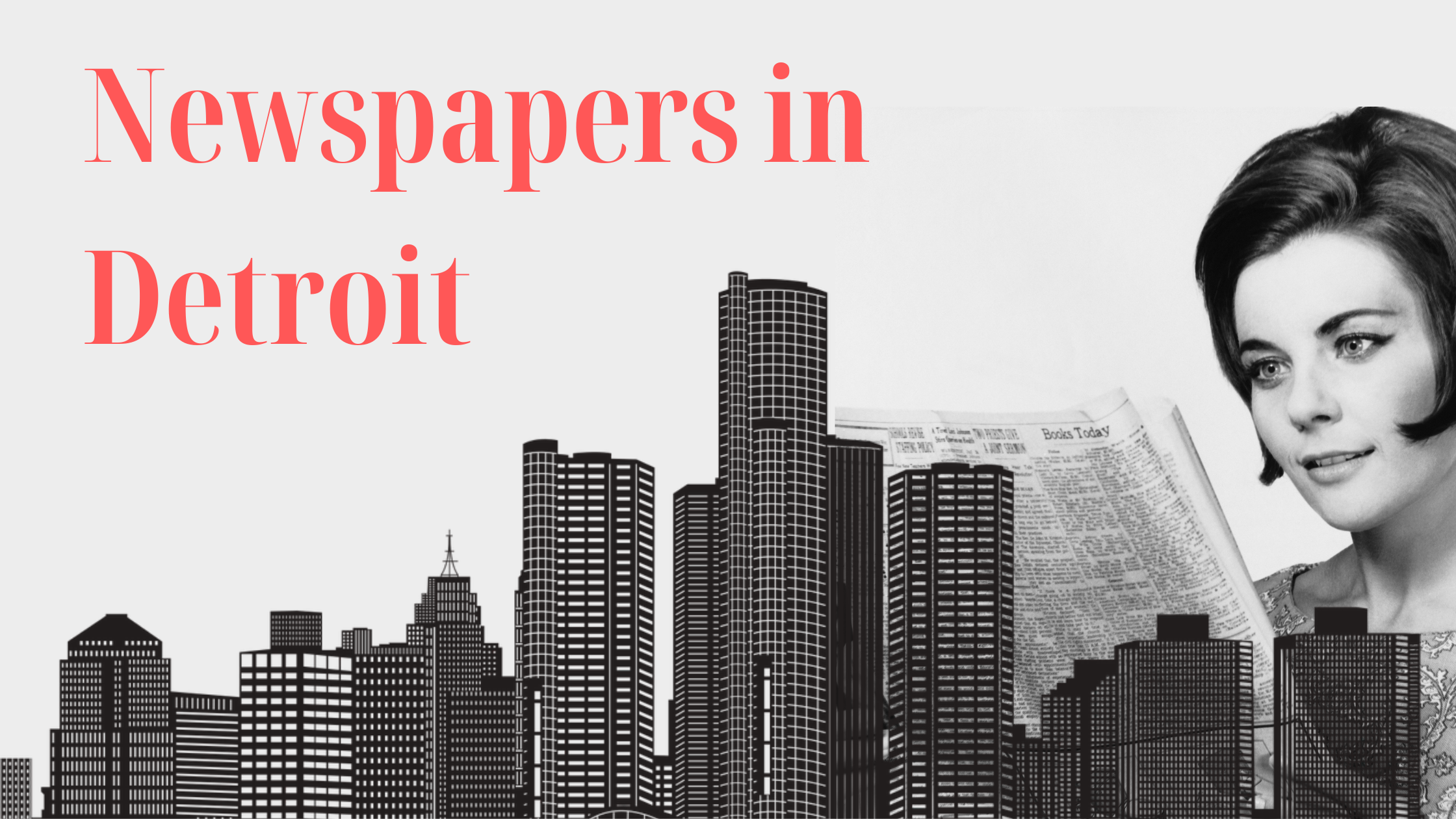 A look back on 190 years of print media in Detroit

Detroit has a reputation as a "two-newspaper town," with the Detroit Free Press and The Detroit News having long loomed over its media landscape, innovating and changing the face not only of journalism in Michigan but the national press as well. However, the actual story of Detroit's newspapers is far richer, with student papers, the independent Black press, and alternative publications all playing important roles. It is an often turbulent story intertwined with the city's complicated history of labor struggle and racial tension. It is also an ongoing story with an uncertain future as the way we consume news continues to evolve and long-established institutions seek new ways to adapt and remain relevant. Ultimately, it is quintessentially a Detroit story: by, of, and about the people who have made it their home.

The Detroit News was established in 1873 by publisher James E. Scripps. To set it apart from its competition, Scripps ordered News journalists to "write like people talk." Also differentiating the News was its position as an afternoon paper in contrast to the morning publication schedule of rivals. Absorbing several competitors around the turn of the century, it quickly became the most widely circulated newspaper in Detroit, a distinction for it would compete with the Free Press over several decades. The News under Scripps' son William would pioneer commercial news radio with the establishment of the Detroit News Radiophone broadcasts, the earliest form of local AM news station WWJ and a contender for the earliest station of its kind. In 1989, the News and its chief rival, the Free Press, entered into a 100-year joint operating agreement, combining operations and publishing joint weekend editions with each publication maintaining their respective editorial staff. 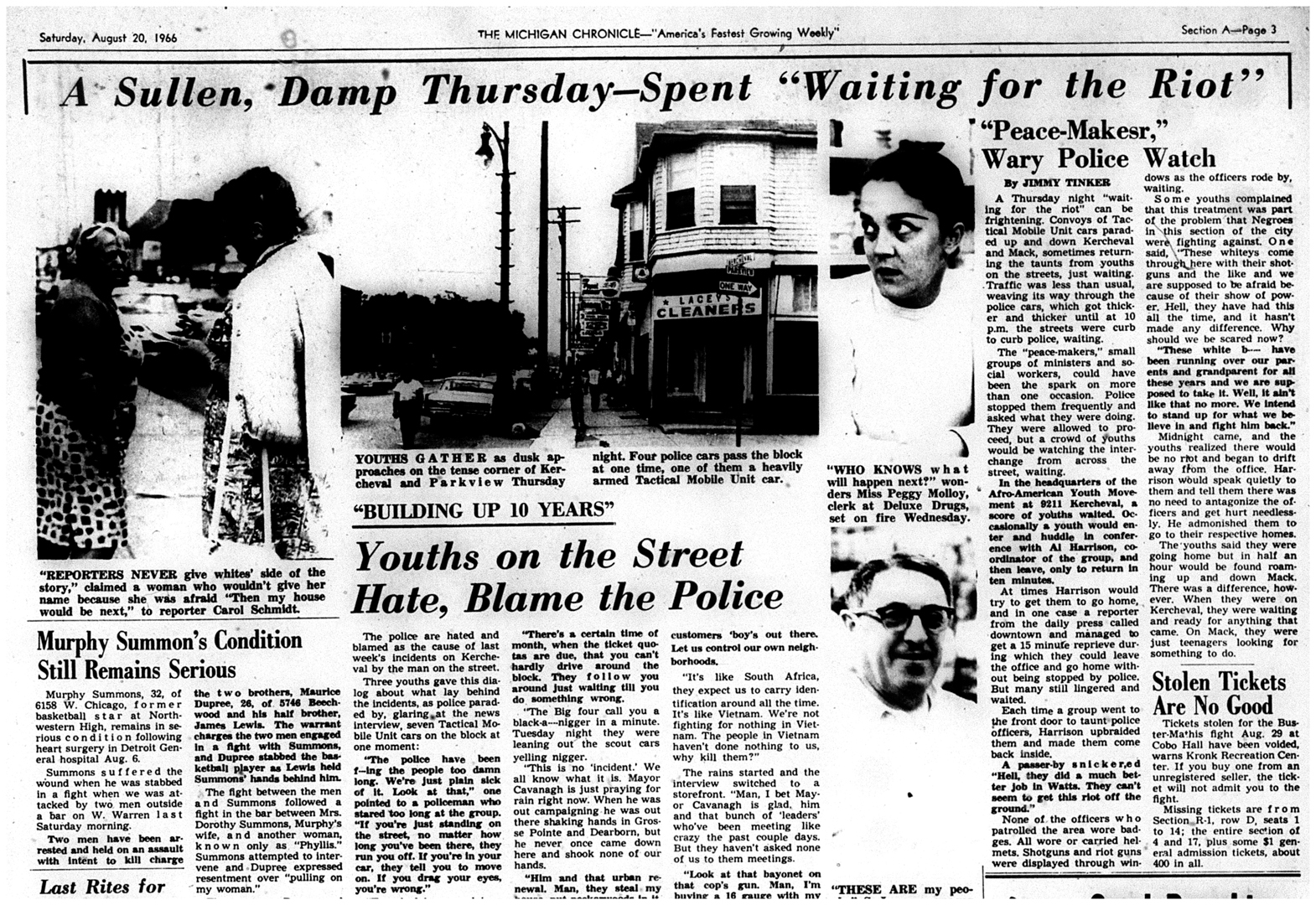 The Michigan Chronicle is a weekly newspaper targeted towards the Black community in Detroit. It was founded in 1936 when John H. Sengstacke, publisher of the highly influential Chicago Defender, after attempting to market the Defender in Detroit, found that Detroit readers wanted more local coverage. Locally run by editor Louis E. Martin, 23 years old at the time of his appointment, its first edition consisted of 5,000 copies distributed freely to potential subscribers, and it established itself as a competitor to Detroit's other local Black newspaper, the Detroit Tribune. Becoming a respected voice within Detroit's Paradise Valley district, the Chronicle was also noted for its vocally pro-labor stance, championing the newly founded CIO. This outlook was somewhat unique among its peers, as the labor movement struggled with anti-Black sentiment from many leaders and union members.

The Chronicle has been named the best Black newspaper in the country five times by the National Newspaper Publisher's Association, and its longtime editor Longworth Quinn became the first African American inducted into the Michigan Journalism Hall of Fame in 1985. 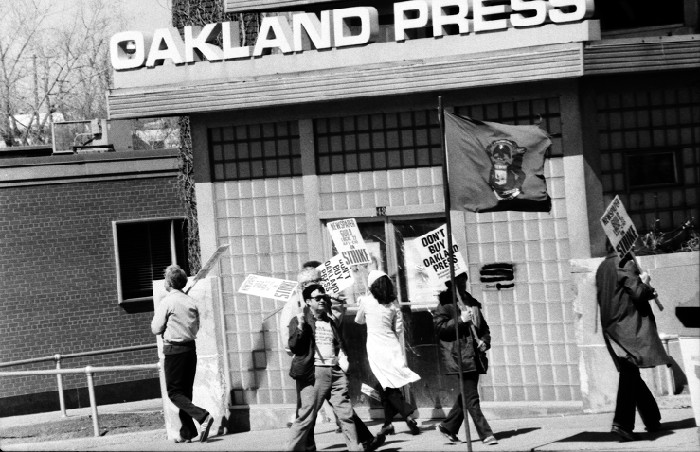 With the rapid growth of the suburbs in the second half of the 20th Century, the ability of Detroit papers to remain competitive relied partly on outreach to suburban populations. While the Free Press and News are both widely consumed outside the city limits, even relocating their printing processes to Macomb County, there are several long-running local competitors as well. The Pontiac Gazette was founded in 1843, going through many iterations before becoming today's Oakland Press. The Press is currently owned by Digital First Media, which also owns the neighboring Macomb Daily of Macomb County and Daily Tribune of southern Oakland County.

Crain Communications is a media company focused on business reporting across industries born in 1916 when G.D. Crain started printing Hospital Management in Louisville, Kentucky. Crain and his successors expanded the number of publications offered, with Crain's Detroit Business launching in 1985 with Crain's son Keith as publisher. Keith Crane had previously been publisher of Automotive News, one of the Crain trade publications, for years and influential in the establishment of the North American International Auto Show. In 2001, Crain Communications relocated its headquarters from Chicago to Detroit, where they remain.

The historic homes of both the Detroit Free Press and The Detroit News (as well as the Detroit Times) were all designed by the "architect of Detroit," Albert Kahn. The Detroit News Building was built between 1915-1917 at 615 West Lafayette, and the Free Press Building between 1924-1925 just blocks away at 321 West Lafayette. The nearby Anchor Bar, situated between the two facilities, was a favored after-work spot for employees. However, the Free Press relocated to the News Building in 1998 after the implementation of the joint agreement between the two papers, and after remaining abandoned for some years the Free Press Building was converted by billionaire Dan Gilbert's real estate firm Bedrock into mixed-use space. In 2014, both publications left the News Building and are currently based in the former Federal Reserve Building. 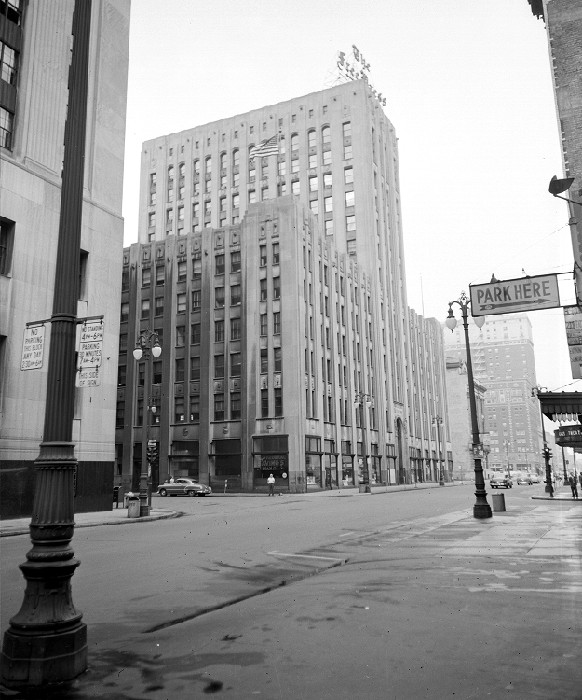 The Detroit Free Press officially began on May 5, 1831, when founder Sheldon McKnight printed the first edition of the Democratic Free-Press and Michigan Intelligencer, renamed the Detroit Daily Free Press and becoming Michigan's first daily newspaper four years later. A strong advocate for Michigan statehood in its early years, it would innovate as it continued to grow, becoming one of the first newspapers in the country to publish a regular Sunday edition. During the Civil War, the Free Press would gain national attention for its battlefield coverage, and in 1881 it became the first American newspaper to be published in Europe when a London edition was established. The London edition, familiarly termed "The Detroit" by British readers, was among the most circulated British periodicals of its time, and ran for 18 years. The most widely circulating newspaper in Michigan today, the Free Press has won 10 Pulitzer prizes since 1932, more than all other Michigan newspapers combined. 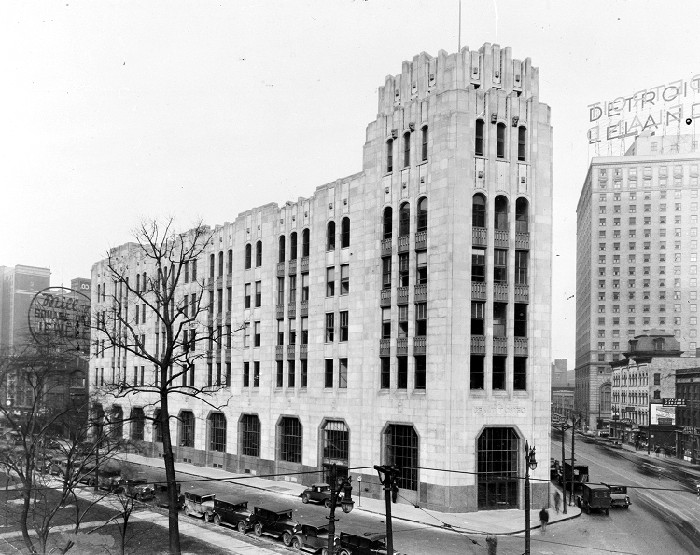 No fewer than six newspapers have borne the name of the Detroit Times over the years, with varying degrees of success and longevity. The most significant was the final iteration, started as an afternoon paper in 1900. Upon its purchase in 1921 by newspaper magnate William Randolph Hearst, the Times multiplied its circulation numbers and became a serious rival to the News and Free Press during the 1940s and 50s, reaching its peak with a daily circulation of 440,000 in 1950. However, its numbers slipped over the 1950s and Hearst ultimately sold the Times to The Detroit News in 1960. The vast majority of Times employees, who had been unaware of the sale until after the final edition was printed, were laid off in the process. The News continued to use the printing facilities of the  Albert Kahn-designed Times Building until moving those operations to Sterling Heights in 1975, leading to the building's demolition in 1978.

On July 13, 1995, after years of tension between publishers and workers at the Detroit Free Press and The Detroit News, about 2,500 workers represented by six different unions began what would turn into a prolonged strike. While the publishers hired replacement workers who were joined by some employees who crossed the picket line as the strike drew on, notably Mitch Albom who upon his return wrote a column calling upon the workers to abandon the effort, the strike and subsequent boycott cost the newspapers about $100 million in the first six months alone. In November 1995, the striking workers began printing their own weekly newspaper, the Detroit Sunday Journal, which enjoyed a circulation of between 40,000 and 60,000 for most of its existence.

While the unions ended the strike in February 1997 with a demand that striking workers be given their jobs back, the newspapers refused and only gradually rehired the original staff. This process dragged out for years, with the Sunday Journal eventually ceasing publication in 1999 and a 2000 federal court ruling overturning the National Labor Relations Board's finding of unfair labor practices by the newspapers effectively cutting off the workers' chance of prevailing. The Free Press and News have never recovered their pre-strike circulation numbers. 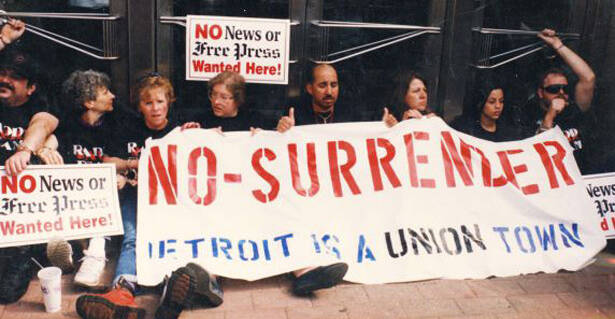 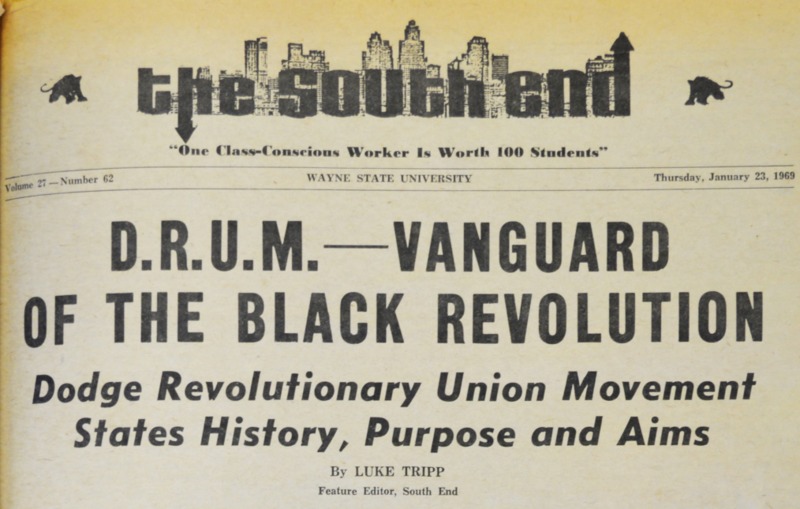 The South End grew out of a long line of student publications at Wayne State University and its predecessor institutions dating back to 1918, at various times known as the Detroit Collegian, Wayne Collegian, and Daily Collegian. The current name was adopted in 1967 as a reference to the location of its headquarters on the south end of the campus. This change would coincide with the adoption of a much more radical and political orientation upon the selection of John Watson, a figure associated with the League of Revolutionary Black Workers, as editor-in-chief of the newspaper in 1968. While this period would be controversial and short-lived, with Watson and his allies being removed from the South End editorial staff in 1973, it solidified the publication's place as a community institution. The South End continues to run stories digitally.