Shakespeare's First Folio: the book that gave us SHAKESPEARE

Provides resources and information relevant to the traveling exhibit, "First Folio! the book that gave us SHAKESPEARE," from the Folger Shakespeare Library in association with the American Library Association and the Cincinnati Museum Center.

Through a competitive application process involving collaboration among the Wayne State University Library System, the Detroit Institute of Arts, and the Detroit Public Library, Detroit was chosen as the Michigan site for this event. The Detroit Institute of Arts will host the First Folio in its Era of Revolution Gallery (3rd floor); the exhibition panels will be on display at the Adamany Undergraduate Library on the Wayne State campus; and the Detroit Public Library will host public events and displays of their related special collections, which include a Shakespeare Second Folio and Fourth Folio.

From March 1 - April 3, 2016, in the atrium of the Adamany Undergraduate Library, the Wayne State University Library System will host the 12 exhibition panels (shown below) that accompany the Folger Shakespeare Library's "First Folio! the book that gave us SHAKESPEARE" exhibit. This traveling display, commemorating the 400th anniversary of Shakespeare's death, is presented in association with the American Library Association and the Cincinnati Museum Center.

Numerous celebrations are planned to accompany this event, as illustrated in this flyer (available for download below). For a complete listing see go.wayne.edu/shakespeare. 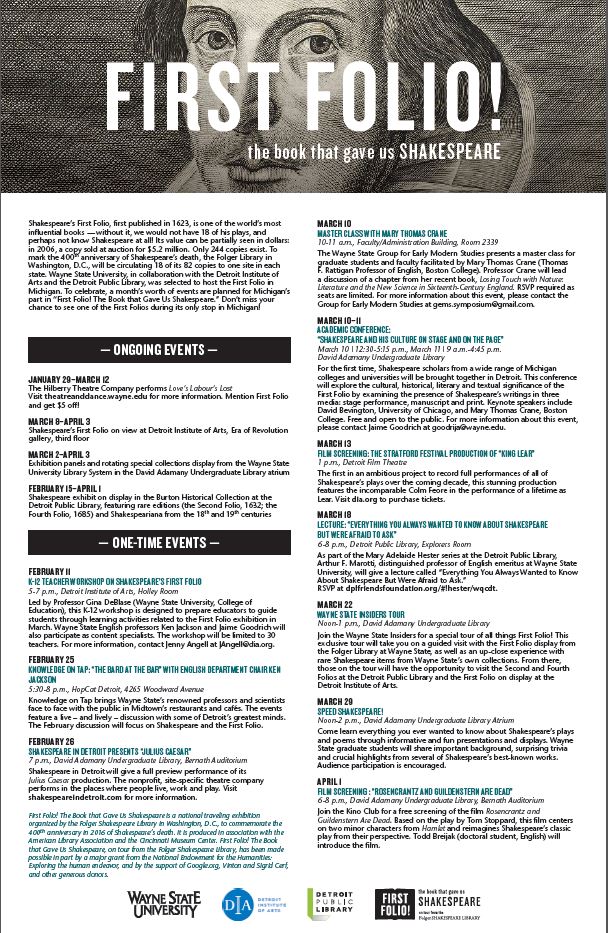 In October, 2015, the Shiffman Medical Library on the Wayne State University campus hosted a traveling display, "And there's the Humor of it: Shakespeare and the four humors," about Shakespeare's use of medicine and medical concepts in his plays. Details about that exhibit, along with a group of rich resources can be found in the research guide linked below.