About This Year's Theme

The theme for Black History Month 2012 is Black Women in American History and Culture.

The Libraries of Wayne State University invite you to explore this year's theme through a selection of exceptional Black Women in Detroit's history. 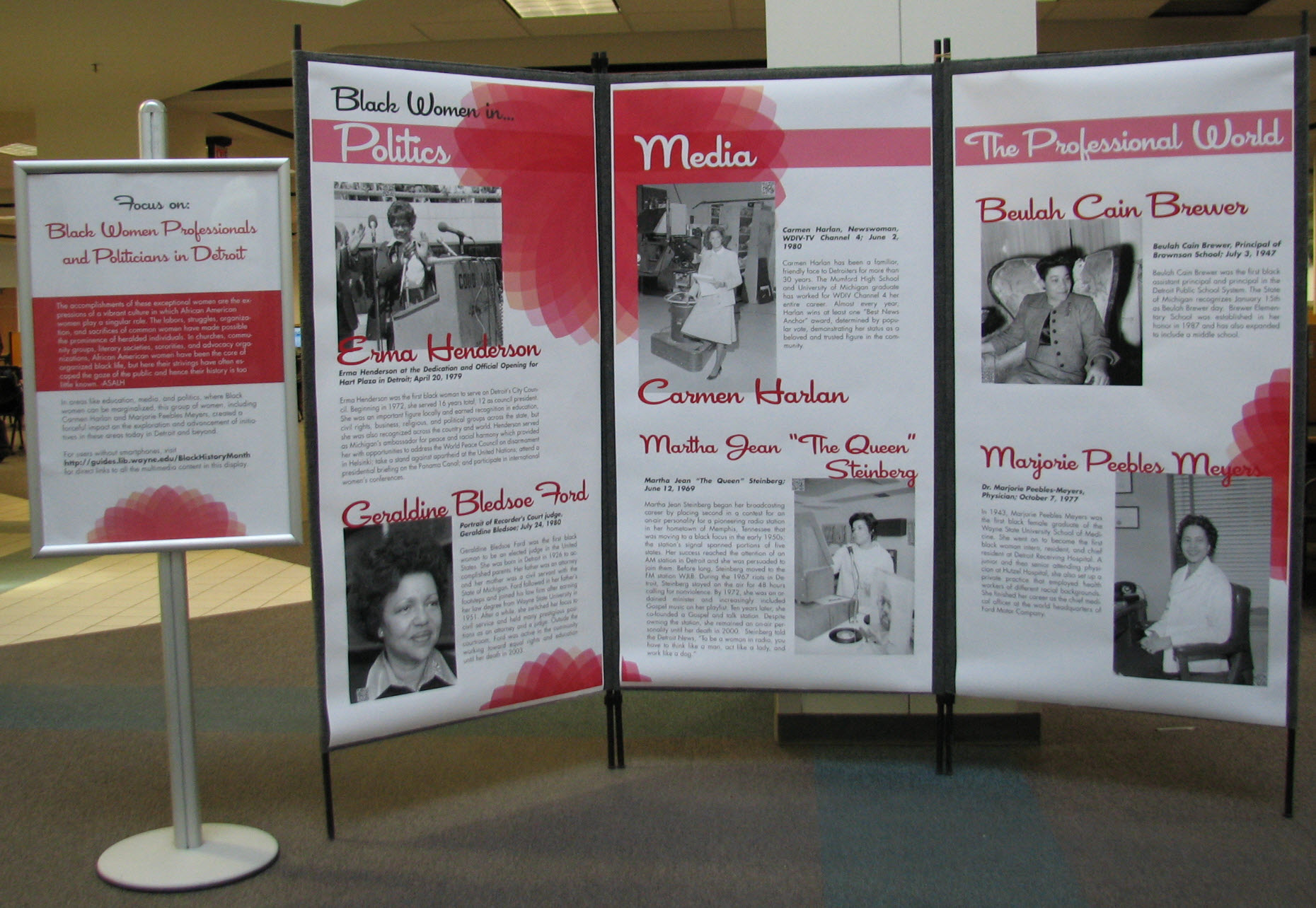 Erma Henderson was the first black woman to serve on Detroit’s City Council.  Beginning in 1972, she served 16 years total, 12 as council president.   She was an important figure locally and earned recognition in education, civil rights, business, religious, and political groups across the state, but she was also recognized across the country and world.  Henderson served as Michigan’s ambassador for peace and racial harmony which provided her with opportunities to: address the World Peace Council on disarmament in Helsinki; take a stand against apartheid at the United Nations; attend a presidential briefing on the Panama Canal; and participate in international women’s conferences. 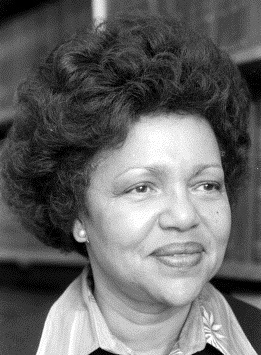 Geraldine Bledsoe Ford was the first black woman to be an elected judge in the United States.  She was born in Detroit in 1926 to accomplished parents.  Her father was an attorney and her mother was a civil servant with the State of Michigan.  Ford followed in her father’s footsteps and joined his law firm after earning her law degree from Wayne State University in 1951.  After a while, she switched her focus to civil service and held many prestigious positions as an attorney and a judge.  Outside the courtroom, Ford was active in the community working toward equal rights and education until her death in 2003.

Carmen Harlan has been a familiar, friendly face to Detroiters for more than 30 years.  The Mumford High School and University of Michigan graduate has worked for WDIV Channel 4 her entire career. Almost every year, Harlan wins at least one “Best News Anchor” award, determined by popular vote, demonstrating her status as a beloved and trusted figure in the community.

Martha Jean Steinberg began her broadcasting career by placing second in a contest for an on-air personality for a pioneering radio station in her hometown of Memphis, Tennessee that was moving to a black focus in the early 1950s; the station’s signal spanned portions of five states.  Her success reached the attention of an AM station in Detroit and she was persuaded to join them.  Before long, Steinberg moved to the FM station WJLB.  During the 1967 riots in Detroit, Steinberg stayed on the air for 48 hours calling for nonviolence.  By 1972, she was an ordained minister and increasingly included Gospel music on her playlist.  Ten years later, she co-founded a Gospel and talk station.  Despite owning the station, she remained an on-air personality until her death in 2000.   Steinberg told the Detroit News, “To be a woman in radio, you have to think like a man, act like a lady, and work like a dog.”

Beulah Cain Brewer was the first black Assistant Principal and Principal in the Detroit Public School System.  The State of Michigan recognizes January 15th as Beulah Brewer day.   Brewer Elementary School was established in her honor in 1987 and has expanded to include a Middle School as well.

In 1943, Marjorie Peebles Meyers was the first black female graduate of the Wayne State University School of Medicine.  She went on to become the first black woman intern, resident, and chief resident at Detroit Receiving Hospital.  She also set up a private practice that employed health workers of different racial backgrounds; and was a Junior and then Senior Attending Physician at Hutzel Hospital. She finished her career as the chief medical officer at the world headquarters of Ford Motor Company. 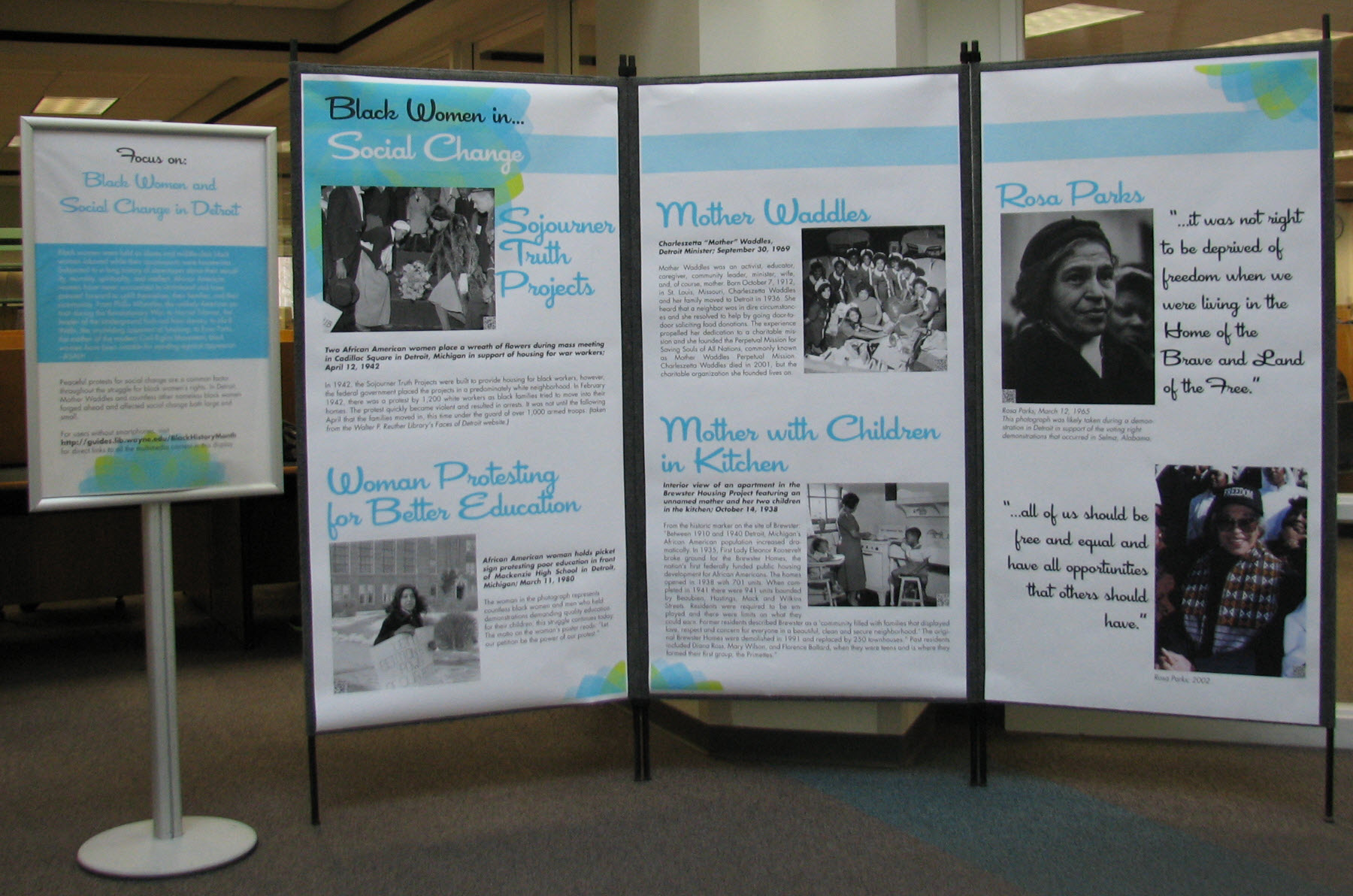 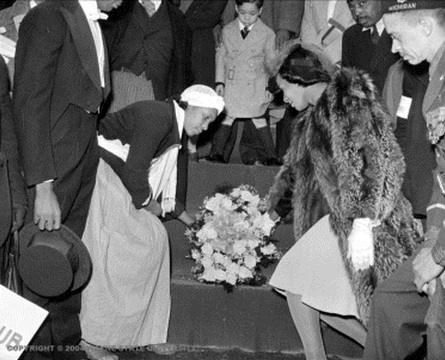 "In 1942, the Sojourner Truth Projects were built to provide housing for black workers, however, the federal government placed the projects in a predominately white neighborhood, in February of 1942, a protest by 1,200 white workers as black families tried to move into their homes, the protest quickly became violent and resulted in arrests, it was not until the following April that the families moved in, this time under the guard of over 1000 armed troops," from the Walter P. Reuther Library's Faces of Detroit website. 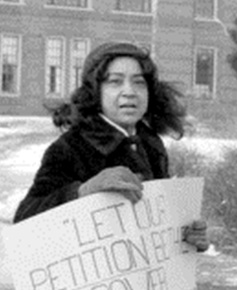 The woman in the photograph represents countless black women and men who held demonstrations demanding quality education for their children; this struggle continues today.  The motto on the woman’s poster reads: “Let our petition be the power of our protest.”

Mother Waddles was an activist, educator, caregiver, community leader, minister, wife, and, of course, mother.  Born October 7, 1912, in St. Louis, Missouri, Charleszetta Waddles and her family moved to Detroit in 1936.  She heard that a neighbor was in dire circumstances and she resolved to help by going door-to-door soliciting food donations.  The experience propelled her dedication to a charitable mission and she founded the Perpetual Mission for Saving Souls of All Nations, commonly known as Mother Waddles Perpetual Mission.  Charleszetta Waddles died in 2001, but the charitable organization she founded lives on. 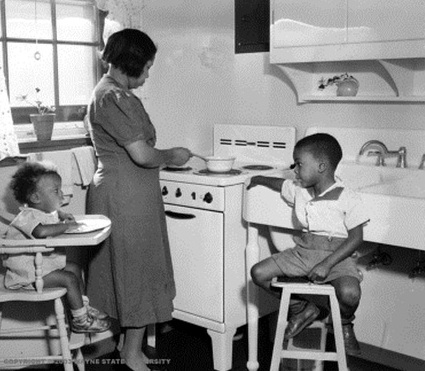 Unknown Mother with Children in Kitchen of Brewster Projects Apartment

From the historic marker on the site of Brewster: “Between 1910 and 1940 Detroit, Michigan’s African American population increased dramatically. In 1935, First Lady Eleanor Roosevelt broke ground for the Brewster Homes, the nation’s first federally funded public housing development for African Americans. The homes opened in 1938 with 701 units. When completed in 1941 there were 941 units bounded by Beaubien, Hastings, Mack and Wilkins Streets. Residents were required to be employed and there were limits on what they could earn. Former residents described Brewster as ‘community filled with families that displayed love, respect and concern for everyone in a beautiful, clean and secure neighborhood.’ The original Brewster Homes were demolished in 1991 and replaced by 250 townhouses”. Past residents included Diana Ross, Mary Wilson, and Florence Ballard, when they were teens and is where they formed their first group, the Primettes. 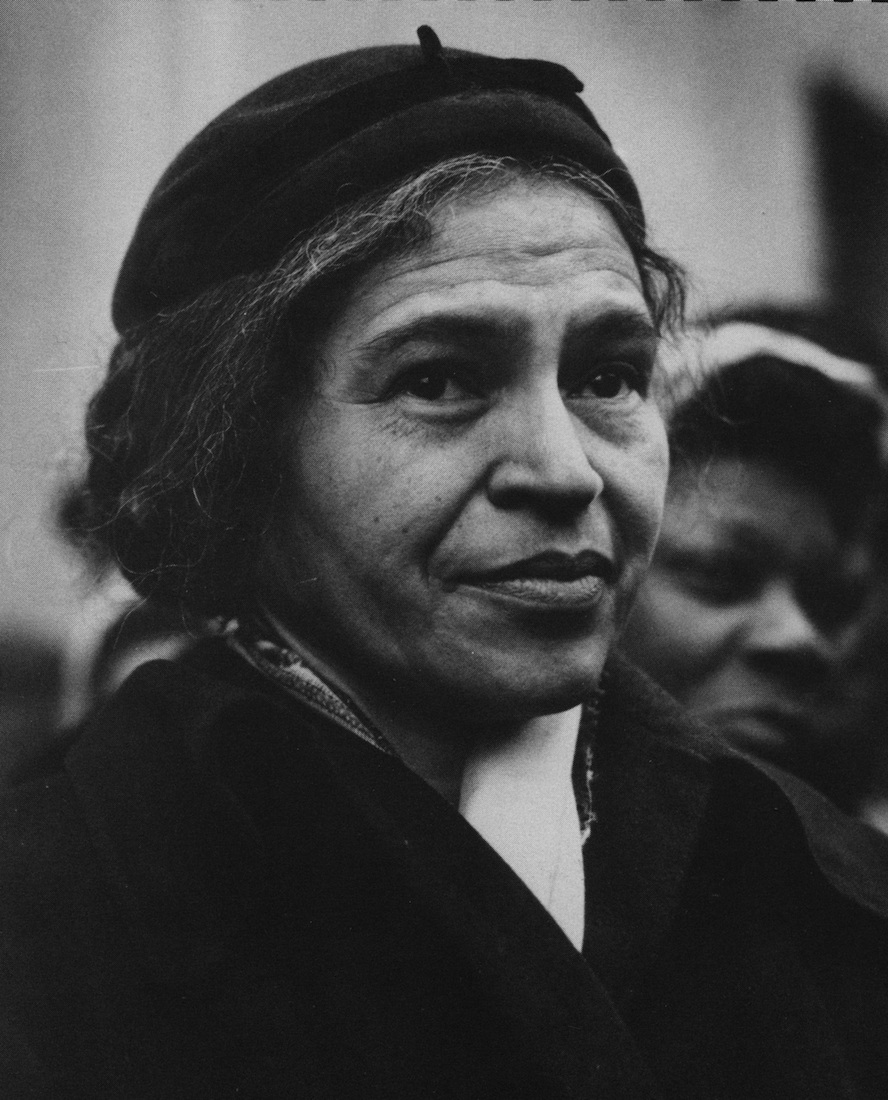 Watch & Read: Videos and Interview About the Bus Incident

Rosa Parks; March 12, 1965.  This photograph was, likely, taken during a demonstration in Detroit in support of the voting right demonstrations that occurred in Selma, Alabama and is part of a the United Auto Workers Collection at the Walter P. Reuther Library. 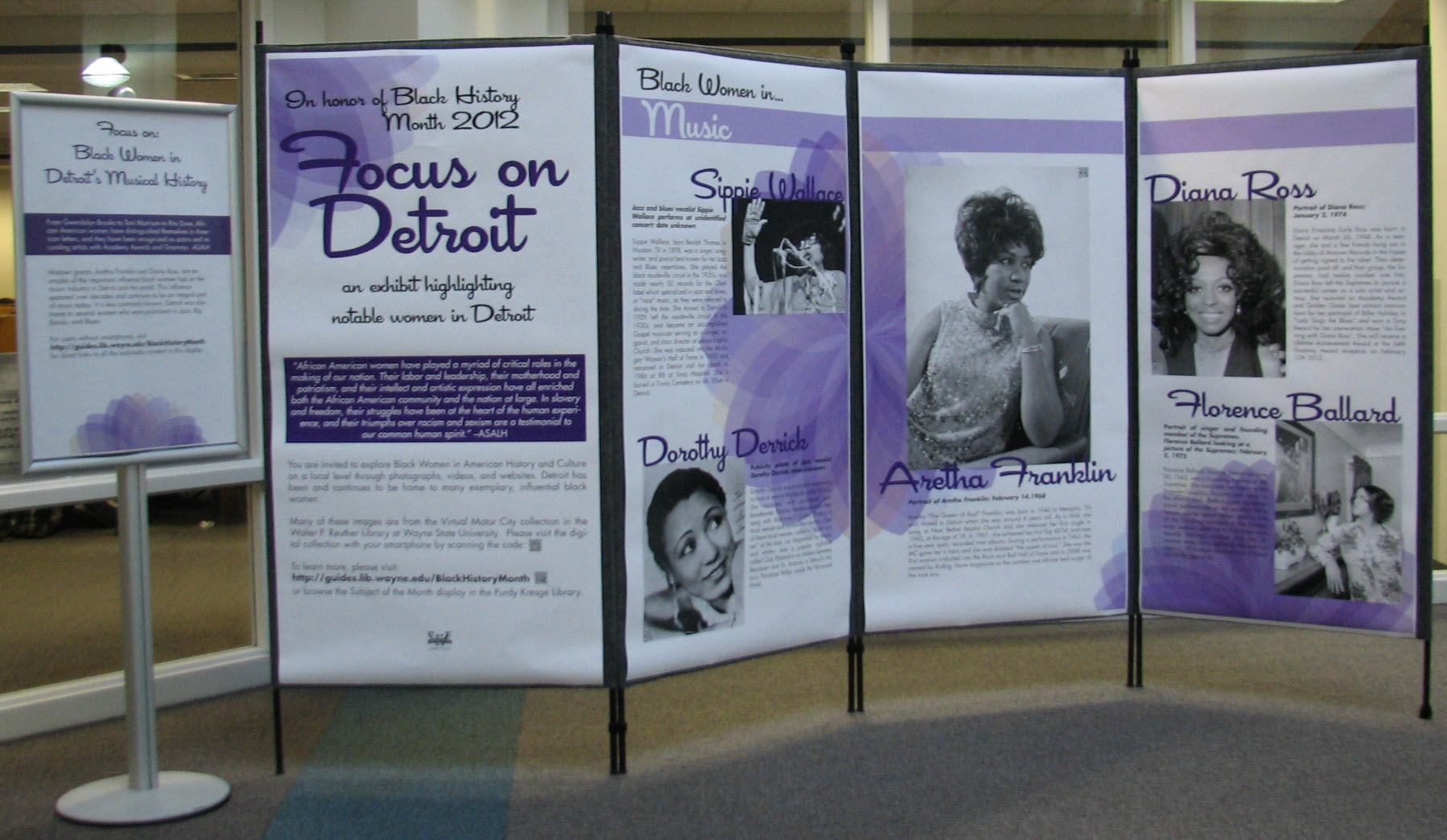 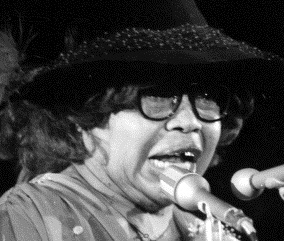 Sippie Wallace, born Beulah Thomas in Houston, TX in 1898, was a singer, songwriter, and pianist best known for her Jazz and Blues repertoires.  She played the black vaudeville circuit in the 1920s, and made near 50 records for the Okeh label which specialized in jazz and blues, or "race" music, as they were referred to during the time. She moved to Detroit in 1929, left the vaudeville circuit in the 1930s, and became an accomplished Gospel musician serving as a singer, organist, and choir director at Leland Baptist Church.  She was inducted into the Michigan Women's Hall of Fame in 1993 and remained in Detroit until her death in 1986 at 88 at Sinai Hospital.  She is buried at Trinity Cemetery on Mt. Elliott in Detroit. 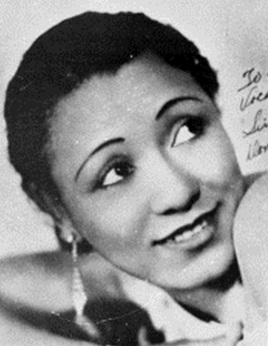 Dorothy Derrick was a vocalist performing in front of several Big Bands in the 1930’s.  She recorded with prominent jazz bandleader Fletcher Henderson and often sang with McKinney’s Cotton Pickers in local venues and across the country.  One of these local venues, called a “black and tan” at the time, i.e. frequented by blacks and whites,  was a popular nightclub called Club Plantation on Adams between Beaubien and St. Antoine in Detroit’s historic Paradise Valley inside the Norwood hotel. 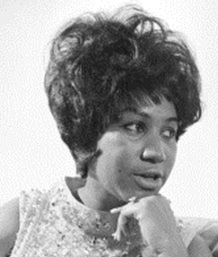 Aretha "The Queen of Soul" Franklin, was born in 1942 in Memphis TN, and moved to Detroit when she was around 4 years old.  As a child, she sang at New Bethel Baptist Church and she released her first single in 1960, at the age of 18.  In 1961, she achieved her first Top 40 hit, and over a five year span, recorded nine albums. During a performance in 1965, the MC gave her a tiara and she was dubbed 'the queen of soul'.  She was the first woman inducted into the Rock and Roll Hall of Fame and in 2008 was named by Rolling Stone magazine as the number one all-time best singer of the rock era. 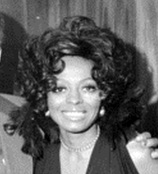 Diana Ernestine Earle Ross was born in Detroit on March 26, 1944.  As a teenager, she and a few friends hung out in the lobby of Motown Records in the hopes of getting signed to the label.  Their determination paid off, and their group, the Supremes, had twelve number one hits.  Diana Ross left the Supremes to pursue a successful career as a solo artist and actress.  She received Academy Award and Golden Globe best actress nominations for her portrayal of Billie Holiday in “Lady Sings the Blues” and won a Tony Award for her one-woman show “An Evening with Diana Ross”. 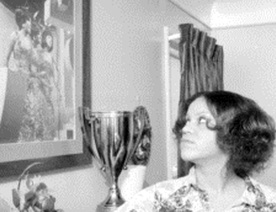 Florence Ballard, born in Detroit on June 30, 1943, was a founding member of the Supremes.  She lived with her family in the Brewster-Douglass Projects and sang in the church choir.  Ballard gave an exceptional performance at her audition for a female quartet before Milton Jenkins, one of the founding members of the Temptations.  Jenkins asked her to find three more equally talented vocalists and the Supremes were born.  Ballard’s life was cut short in 1976 when she died from a blood clot at the age of 32.