The exhibition, from the National Library of Medicine, tells the story of nurses who changed the medical profession and dramatically improved services to victims of domestic violence in the late 20th century.

The National Network to End Domestic Violence (NNEDV), a social change organization, is dedicated to creating a social, political and economic environment in which violence against women no longer exists.

It was formed in 1990 when a small group of domestic violence victim advocates came together to promote federal legislation related to domestic violence.  The group was known as the Domestic Violence Coalition on Public Policy. 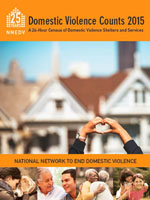 Listed below are some common statistics that illustrate just how much our society, on both a local and national level, is affected by domestic violence and sexual assault.