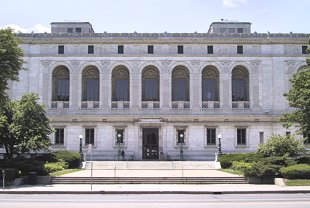 The Detroit Public Library (DPL) is the largest library system in the state of Michigan. The Main Library and its 23 neighborhood branches make it one of the most valuable and accessible public institutions in metropolitan Detroit.

TIP (The Information Place) is a free community information and referral service that helps people find answers to the problems of everyday living. Librarians link individuals to agencies and local nonprofit organizations that offer services such as emergency food, health care, support groups, and parenting education.

Founded in 1915 by auto pioneer Henry Ford and now one of the nation's leading health care providers, Henry Ford Health System is a not-for-profit corporation managed by Chief Executive Officer Nancy M. Schlichting and governed by a 21-member Board of Trustees, with volunteer-led advisory and affiliate boards providing additional leadership.

It is comprised of hospitals, medical centers and one of the nation's largest group practices, the Henry Ford Medical Group, which includes more than 1,200 physicians practicing in over 40 specialties. The System's flagship, Henry Ford Hospital in Detroit, is a Level 1 Trauma Center recognized for clinical excellence in cardiology, cardiovascular surgery, neurology and neurosurgery, orthopedics, sports medicine, multi-organ transplants and cancer treatment.

With more than 23,000 employees, Henry Ford Health System is the fifth-largest employer in metro Detroit, and amongst the most diverse. Generating more than $1.7 billion of annual economic stimulus, it proudly acts as one of Michigan's anchor institutions.

Michigan State University is integrally connected to Metropolitan Detroit through its strong connections and large numbers of alumni residing in Wayne, Oakland and Macomb counties. MSU has long had a presence in Metropolitan Detroit through its many MSU Extension programs, arts and economic development initiatives, and partnerships in teaching and education, including long-term support of the Detroit Pre-College Engineering Program (DAPCEP).

More recently, MSU’s presence in Detroit has been enhanced through its addition of the College of Osteopathic Medicine’s campuses in Detroit, Wayne County and Macomb County; the Partnerships Office and the Skillman Good Schools Resource Center at YouthVille; and the MSU Detroit Center.

Located in the Brush Park Historic District along Detroit’s main thoroughfare, at 3408 Woodward Avenue, the MSU Detroit Center is very much in and of the community in which it sits. The facility is housed in a 22,000-square-foot 1912 Albert Kahn building that once housed a print shop... more

The Charles H. Wright Museum of African American History is the world's largest institution dedicated to the African American experience.  The museum provides learning opportunities, exhibitions, programs and events based on collections and research that explore the diverse history and culture of African Americans and their African origins. Housing over 30,000 artifacts and archival materials and home to the Blanche Coggin Underground Railroad Collection, Harriet Tubman Museum Collection, Coleman A. Young Collection and the Sheffield Collection, a repository of documents of the labor movement in Detroit, the museum also features ...more