An examination of the development and applications of User or Patron Personas in the WSULS.

In-Person: 500,000 in 2009, typically 3-5 times per week (Kresge survey).  Though not as specific as Piwik stats can be, these kind of general use numbers might be helpful in creating personas, particularly observations that the majority of patrons use the library 3-5 times per week.

Browser usage is evenly split between the big three, IE, Firefox, Chrome.  Because the Webkit family (Chrome / Safari) are well represented in mobile devices, it would probably make sense to include IE and Firefox as the default browsers for a couple personas. 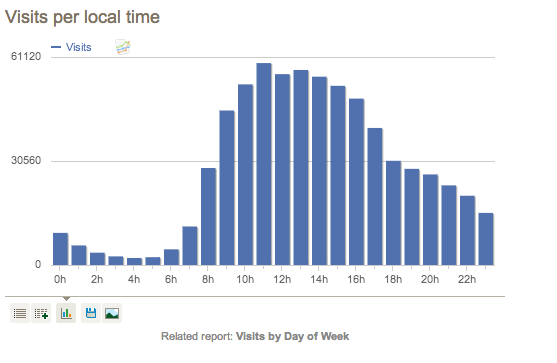 Desktop users follow a pretty typical curve mirroring the 9-5 hours, tapering off at a constant rate.  Some of the decline may be libraries closing for the evening (which also support a spike in mobile later in the day).

For Mobile browsers, the default browser is almost entirely of the Webkit family (Safari / Chrome).  Any persona that is a mobile user, should probably use this browser type. 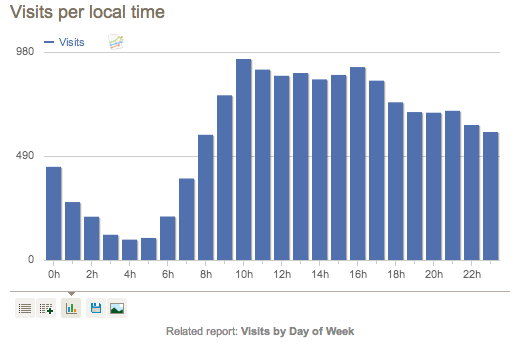 Unlike typical desktop users, there appears to be increased use of the library website into the night by mobile users.  It is difficult to speculate as to why, but the signal seems pretty strong.

Top 25 cities that access the library website.  In this time period, 1/1/2013 - 3/20/2013, Detroit had about 91,000 visitors.  The next highest was Troy at about 2,200.  The overwhelming majority are coming from Detroit, but many of these are from on campus.  A very quick analysis into this found that about 50% of Detroit users were coming from on-campus IP's.  That still leaves a sizeable majority.  But when you begin to tally surrounding areas, it is clear there is a large population within driving distance, but accessing remotely.   Finally, there are certainly outlying cities like Grand Rapids, Flint, Lansing, etc, that have users (e.g. Grand Rapids had 387 during this time).

Top 25 regions from our Piwik stats.  While the top 25 cities show that the majority of library website traffic comes from Detroit and surrounding area, other regions are represented as well.  With a strong online-program, it might not be unreasonable to consider an online distance user as a potential persona.

"Environment of Use" is a broad term, but if it encompasses the task at hand as well, then motivating factors related to type of use might be a helpful atttribute for persona creation.  Pulling from the ECAR and WSU library surveys, a couple patterns emerge for desktop, mobile, and in-library users.

Desktop: Use desktops and the library website for research, word processing, "actual work"

In-Person: Many people surveyed about why they come to the library is simply, "a quiet place to study."  This was more prevalent among in-person users than using resources or services.