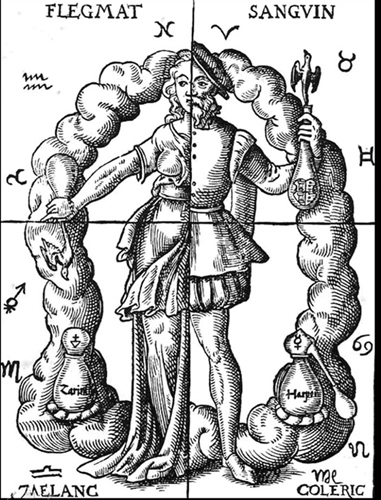 William Shakespeare (1564-1616) created characters that are among the richest and most humanly recognizable in all of literature. Yet Shakespeare understood human personality in the terms available to his age—that of the now-discarded theory of the four bodily humors –blood, bile, melancholy, and phlegm. These four humors were understood to define peoples’ physical and mental health, and determined their personality, as well. The language of the four humors pervades Shakespeare's plays and their influence is felt above all in a belief that emotional states are physically determined. Carried by the bloodstream, the four humors bred the core passions of anger, grief, hope, and fear—the emotions conveyed so powerfully in Shakespeare’s comedies and tragedies. Curator Gail Kern Paster explains “The four humors were an early typology for human personality. Shakespeare uses them, even as he transcends them, to create the vivid characters whose emotions continue to fascinate and delight us.”

Alchemic approach to four humors in relation to the four elements and zodiacal signs
from Quinta Essentia by Leonhart Thurneisser, 1573

"Melancholy is the most complex of emotions for Shakespeare and his contemporaries, as it was for the ancients. The cold, dry temperament was considered the least desirable of the four, yet melancholy was also traditionally associated with genius and the life of scholarship." 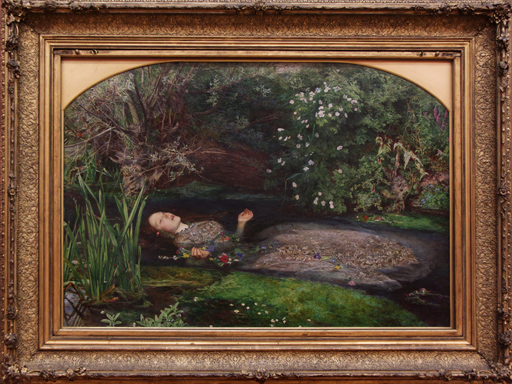 The scene depicted is from Shakespeare's Hamlet, Act IV, Scene vii, in which Ophelia, driven out of her mind when her father is murdered by her lover Hamlet, drowns herself in a stream:

There, on the pendent boughs her coronet weeds
Clambering to hang, an envious sliver broke;
When down her weedy trophies and herself
Fell in the weeping brook. Her clothes spread wide,
And, mermaid-like, awhile they bore her up;
Which time she chanted snatches of old tunes,
As one incapable of her own distress,
Or like a creature native and indued
Unto that element; but long it could not be
Till that her garments, heavy with their drink,
Pull'd the poor wretch from her melodious lay
To muddy death.

The pathos of Ophelia’s situation is clear even before her father’s murder at Hamlet’s hands. Lacking activity and the hopeful future symbolized by marriage, Ophelia succumbs to despair and eventually madness. 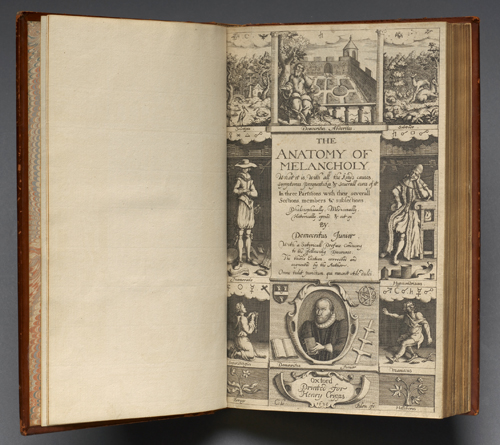 Robert Burton, Anatomy of Melancholy, 1628. Courtesy National Library of Medicine. English Renaissance cleric and scholar Robert Burton (1577–1640), who wrote about the different types of melancholy, described the female melancholic—represented by virgins and widows—as special cases. According to Burton, unmarried gentlewomen with little to do are afflicted with a “torrent of inward humours.” Above all, they lack the social purpose conferred only by marriage. 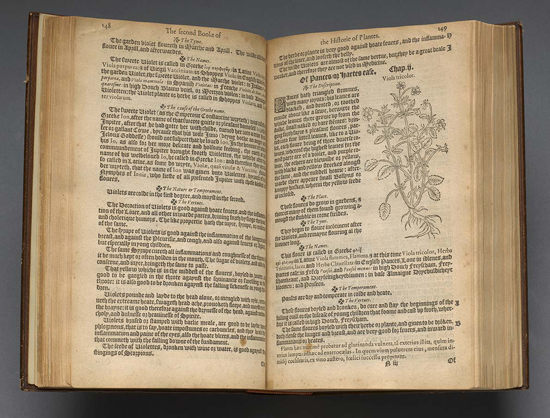 Rembert Dodoens, A Niewe Herball, 1578. Courtesy National Library of Medicine. The healing powers of violets described by Flemish physician and botanist Rembert Dodoens (1517–1585) were well known to Shakespeare’s contemporaries. Madness of the kind Ophelia suffers after her father's death and Hamlet’s rejection of her would have been understood as a drying and overheating of the brain. The cooling properties of violets and their sweet scent—what we would call aromatherapy—would have been prescribed in her case. But there is no one in the Danish court to befriend and care for Ophelia. So it is ironic when in her madness she distributes flowers to the court and tells them, “I would give you some violets, but they withered all when my father died.”

"For William Shakespeare and his contemporaries, aging was a process of gradual drying of the flesh and cooling of bodily humors. The body’s supply of blood diminished as individuals approached the final coldness and dryness of death. In old age, the body developed an excess of melancholy and the sad, unforgiving, and close-fisted disposition that accompanied that retentive bodily humor." 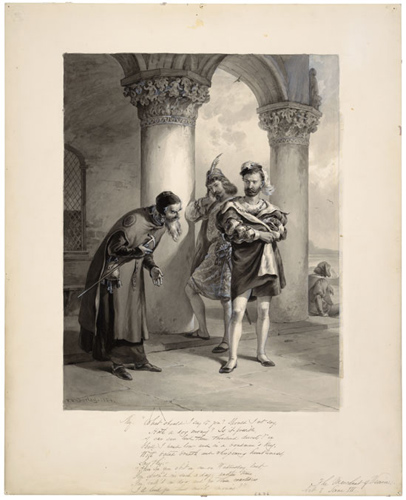 "Sir John Tenniel, Merchant of Venice, 1879. Courtesy Folger Shakespeare Library. William Shakespeare’s contemporaries would have identified Shylock’s traits—his occupation as a moneylender, his calculating disposition, his suspiciousness of others, his long memory, and his cruelty in demanding a pound of flesh from the merchant Antonio for repayment of a debt—as melancholic." 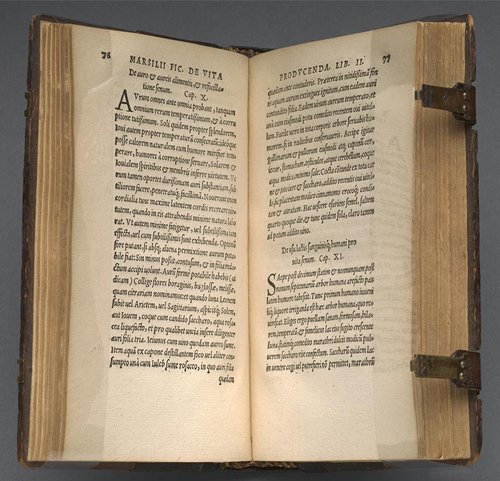 Marsilio Ficino, De vita libri tres, 1529. Courtesy National Library of Medicine. The Italian philosopher Marsilio Ficino (1433–1499), himself a melancholic by birth, was interested in warm, moistening therapies to prolong life and counteract the cold dryness of old age. In his De vita libri tres (Three Books on Life), he recommends that old people drink the warm milk of a young woman “who is healthy, beautiful, temperate, and cheerful.” He would have the elderly take spicy cordials to keep them “in a state of natural greenness” and walk among green fields because “a certain youthful spirit flows to us through the odor, sight, use, and habitation of and in them.” 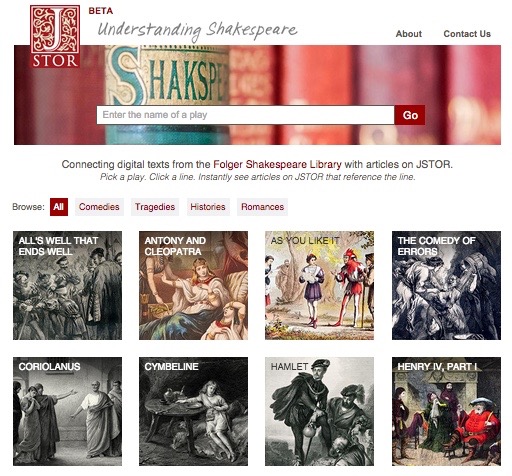 Taming of the Shrew

"Shakespeare depicts the full range of humoralism in his dramatic characters. An excess of the hot, dry emotion of choler, or yellow bile, produced an angry disposition. Choler is valuable in great warriors but in the domestic world of romantic comedy, anger—especially the anger of women—represents a social problem for Shakespeare’s age, which calls for strong therapeutic intervention." 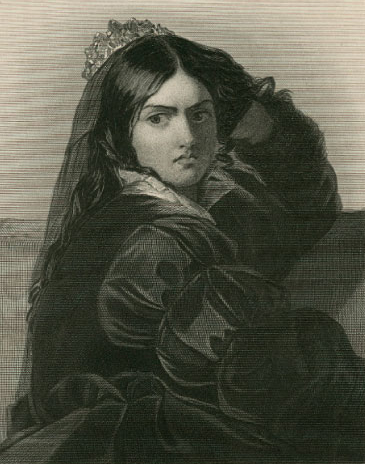 How to manage female anger is the central question of The Taming of the Shrew. Both protagonists, Kate and Petruchio, are identified as choleric by nature, and his behavior in the play is widely seen as eccentric and disruptive. Yet, it becomes Petruchio’s job as husband to tame his shrewish wife and make her “a Kate conformable as other household Kates.” 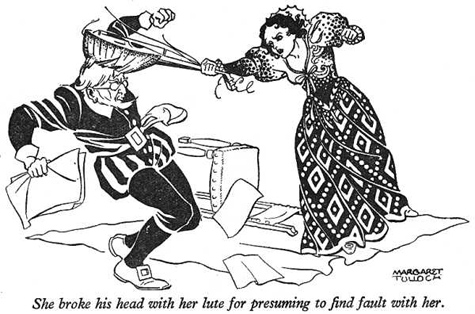 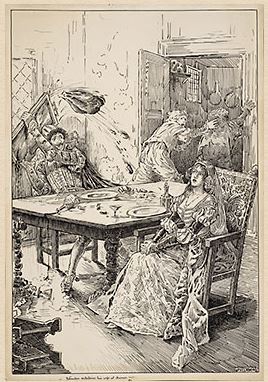 Petruchio denies his wife dinner, claiming that roasted meat is too hot and dry for her nature. He deprives her of the pleasure of new clothes and of female companionship. All these deprivations have the effect of wearing her out, both physically and emotionally, until by the end of the play she is willing to submit to his humor, no matter what it might be. 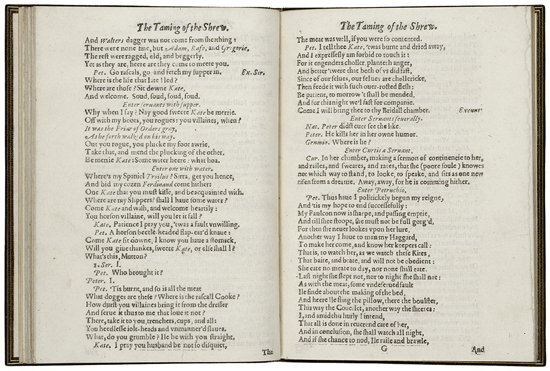 William Shakespeare, The Taming of the Shrew, Quarto, 1631.

Petruchio‘s harsh program of “taming” his bride is a calculated intervention in her living conditions. He intends to change her humor by removing the accumulation of hot, dry choler in her body.