The “And there’s the humor of it” Shakespeare and the four humors online exhibition includes instructional resources for educators in K-12 as well as in higher education institutions. The following educational resources provide examples of how the rich content and primary sources in the exhibition can be used in a classroom. They are developed as suggestions that an educator may adapt in whole or in parts, as she or he deems most appropriate for the students’ interest and academic goals.

A medieval German woodcut depicts the temperaments of the cold and dry qualities of the melancholic disposition, which were associated with old age, retentiveness, and scholarship, like the old man depicted here with his head resting on a table. (first image) The hot, moist man representing the sanguine temperament is depicted as an active wooer embracing a woman. (second image) A cold, moist phlegmatic couple prefer retirement and leisure, signified here by music. (third image) The hot, dry man of choler furiously beats the woman kneeling helplessly at his feet. (fourth image) 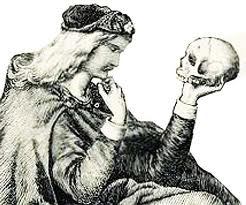 The Changing Explanations in Mind-Body Medicine module provides teachers and students with the opportunity to discuss the implications of the exhibition “And there’s the humor of it” Shakespeare and the four humors for our understanding of how practicing physicians and medical scientists have, over a considerable period of time, typically explained disease and the factors which cause it. Looking selectively at Western medicine over its long history and in the most basic terms, it focuses on the recurrent ways in which biological (body-based) and psychological (mind- or emotion-based) explanations have been used to account for diseases of both the body and mind, and it challenges the common assumption that biological explanations are always better.

The module consists of three units with two classes each. The first unit covers the period from Greek antiquity through the Medieval period (ca. 450 BCE to ca. 1450), the second the Early Modern period (ca. 1450 to ca. 1650), and the third the Modern period (ca. 1650 to the present). Each class includes an introduction, suggested primary and secondary source readings, and a set of discussion questions.